I am in the fortunate position of being able to afford to build myself a new house (well...perhaps myself and the bank). Having been to several 3rd world countries and knowing that there are lots of people in the world who don't even have housing, I felt a few pangs of guilt about this. I had a decision to make: rehab the old or build new. The cost to rehab my old house was going to be substantial. It was October of 2009. My husband had passed away in August from liver cancer. I was in the depths of grief and sorrow. I needed a project. I decided that if I had to plunk down a lot of money anyway, it was better to build new. I also decided that if I was going to build new, I was going to build green. My new house will be both beautiful and "green". I will share the journey and the adventure with you.

Find of the Century 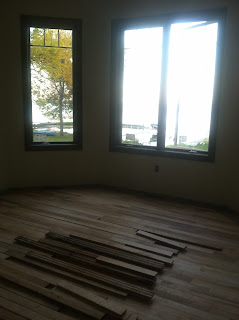 I just wanted to share some pictures of my beautiful wood floor--which I fondly refer to as the find of the century. My builder had taken me up to New London, WI. several months ago to the Northside Planing Mill to look at wood planking for flooring. When I first arrived, Dan, the owner, showed me some nice oak, and maple. They plane all of the wood there themselves. Plus, they had me pick out some sample pieces of wood trim to decide upon later. Towards the end, he said, "Jamey told me that you were building green, so I thought you might be interested in this wood. Its a reclaimed maple, and this particular type is called birdseye maple.  I finished off a couple of pieces so that you could see how it looks." He said that he had purchased a large amount of it about 10 years ago, and had saved some for a potential future project at his own house but had decided that it wasn't going to work out. Apparently, his wife was not  interested in it. The wood had come from a 100 year old woolen factory in New Jersey. Dan re-planed it at his shop, taking the top 1/8" off and making it into a tongue and groove planking for modern flooring.


My first impression of the wood pieces he showed me was, "These look beautiful!" Cautious soul that I can be, I said, "Let me take them home and look at them, and I will let you know." He offered a great price per square foot ($4.50). It wasn't too long after I got them home that I said to myself, "Are you crazy? What is there to think about? Get the reclaimed maple flooring!" It was my friend, Cindy,  one of the  xray techs at work who came up with the phrase, the find of the century, after she took a look at the sample pieces I showed her. She has some birdseye maple in her home, too. The challenge was whether there would be enough to cover the space I wanted it in since I decided I wanted it in the sunroom, dining room, kitchen and office. Jamey and Dan came up with the idea to use a walnut border around it to extend the coverage of the reclaimed maple--another gift! I thought it was a great idea. I was a little nervous about a month ago when Dan called from the planing mill. He wanted me to stop up there to check out the unfinished samples of the reclaimed maple. Its about a 45 minute trip. I asked, "Is something wrong?". He said, "No, I just want to make sure you are going to like it before it gets put down as a floor." It was a beautiful fall day, so I took the ride up to New London to his planing mill to look at it again. All along the way, I was worried he was going to take the floor away from me. And the other half of me was worried that maybe the pieces he had showed me originally were the best pieces and the rest had major defects or something. So, I arrived at the mill. He had a large portion of unfinished wood laid out on the floor. I studied them and said, "Dan, they look just as beautiful as they did before. I still want them." He pointed out the variation in color and the original nail holes that were square because the blacksmith hammered out each nail back then with a square point, not like the mass produced factory made ones that we have today. "Yep, I still love it", I said, " Blemishes and all. It needs a home!" It had been lying up on a shelf for about 10 years in Dan's shop. He happily sent it down to Oshkosh for my house once he was assured that I appreciated it. I may be biased, but I think it is the most beautiful floor I have ever seen! 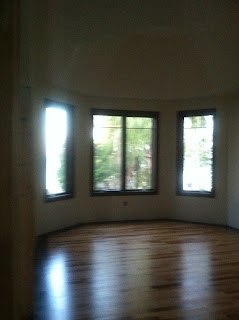 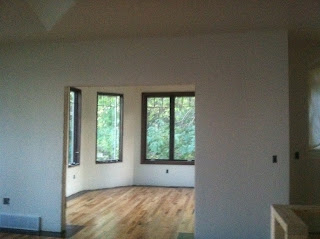 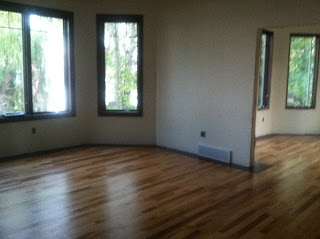 Some Ups and Some Downs


The Good News: I am so excited about my house!!! It is absolutely beautiful and exceeding all of my expectations! It is like having Christmas every time I go over there! I just saw my newly installed, reclaimed maple flooring with a walnut border and its gorgeous--and it doesn't even have its final finish on it!. Such character of the wood--I love it. I am praying that they have enough to go into my small office too. They weren't sure if they would the last time I spoke with them. The tile looks wonderful too. I had purchased the tile way back in February, based on a 4" sample. I was kind of shocked when it got shipped to me in the 12 x12" size and I could see all of these large crevices and pits in it. I wasn't sure if I would like the finished product, but I do. They fill in most of the cracks and pits with the grout and it has a wonderful depth and texture to it. A matching mosaic tile creates a border in the front foyer. The wood trim has a rich and wonderful color to it, and the stone and the siding and the dryvit look fantastic together. Plus the ceilings--they're fantastic too! Lots of beautiful angles and arches in the architecture--I am so blessed. I have had so many wonderful people to help in this process to make it such a beautiful house. I cannot thank them enough. I was especially touched by Bev at Lowe's in Oshkosh this weekend. I had a deadline to pick out the tile for the bathroom. She works in the flooring department there, and has a degree in interior design. She took all the samples I had brought in of the travertine stone, the color of the woodwork and the color of the paint, and helped me come up with wonderful tiling for my shower in a short amount of time. What a godsend she was!


The Bad News: The front door and the transom window above it were due to come in this week. When Jamey, the builder, called on it, he was informed it was on back order. Hmmm, it would have been nice of them to have told us sooner. So...the parade of homes is October 20-23, and the door to the house will not be here until the 28th. I asked if something temporary could be done, and the answer is no. The framing for the door, the transom, and the door itself , plus the stone going around it, all work together and can't be done in a temporary way. My beautiful home has been taken out of the parade of homes for the fall. I was so sad. I was almost getting a house for my birthday on the 23rd. I was looking forward to being able to say that. However, my house will be in the Spring parade of homes, guarenteed. And, I will be able to move in when my house is completed.


I also still have moments of aching and sadness that I am doing this process alone, without a husband  to share in my trials and joys. Although my friends and family have accompanied me to the house on occasion, mostly its been my journey alone. Like tonight, when I saw the installed maple flooring for the first time. It was just me in the house, saying ooh, and aah.  I wish I could look forward to when "we" will move in, instead of when "I" will move in. I have never had to be this independent before and I am not quite sure what to make of it.
Posted by Kristin Neilsen at 6:20 PM No comments:

Link To My Builder

Link to My Architect

Link to my Geothermal Installer 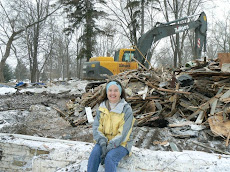 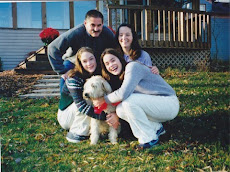